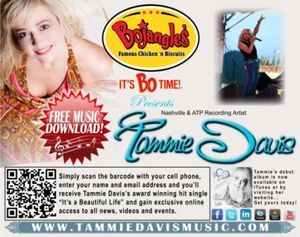 Carolina’s Own, Tammie Davis appearing on Bojangles’ Restaurants, Inc. tray liners at participating locations starting week of October 14, 2013.
Nashville, Tennessee (October 18, 2013) ATP Records-Nashville and Southeastern U.S. Regional Country Music Artist, Tammie Davis will appear on tray liners at participating Bojangles’ Restaurant locations starting week of October 14, 2013. Tammie is sponsored by the Charlotte, N.C.-based restaurant chain which was named one of Forbes’ top 12 best fast-food franchises to own, as well as recognized as the fastest growing chicken chain by Technomic in 2013. Bojangles’ boasts more than 555 locations in 10 states, primarily in the Southeast, as well as the District of Columbia and three international The tray liner will display a photo of Tammie, the Bojangles’ Restaurant logo, “It’s A Beautiful Life” CD cover and a barcode to scan via your mobile phone to receive a free download of Tammie’s music. The tray liners will appear at participating North Carolina and Tennessee locations.

In 2010, Tammie has turned heads with her debut CD ‘It’s a Beautiful Life’ which was released to over four-hundred digital distribution outlets. It can be heard streaming on Pandora.com which makes Tammie one of the few independent artists accepted by the largest internet radio station. 'It's A Beautiful Life' the single, was released to national and international country radio and was picked up by one-hundred forty radio stations across the U.S., Europe, Japan, Canada and twelve other countries. Tammie is also getting attention from NASCAR with her continued invites to perform the National Anthem at NASCAR Speedways in Kansas City and Charlotte.